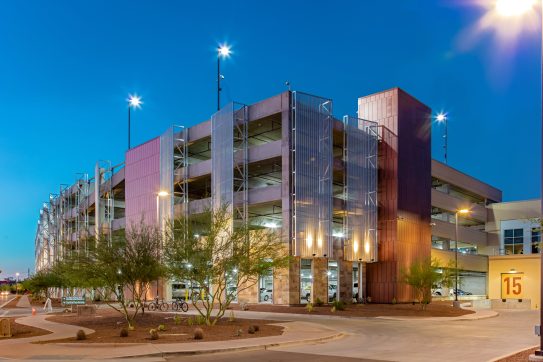 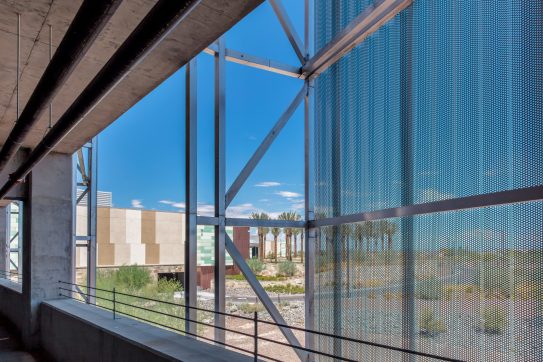 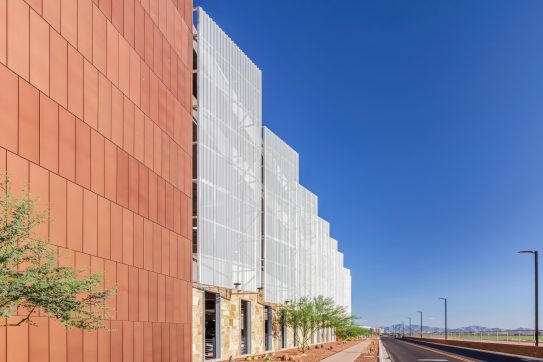 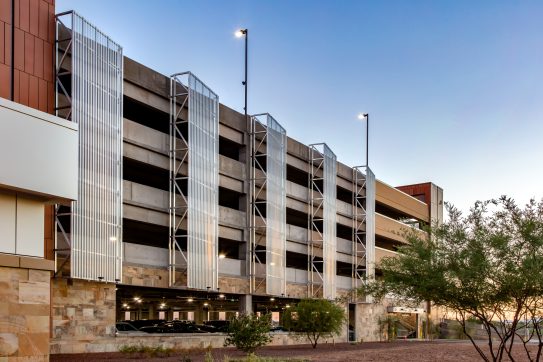 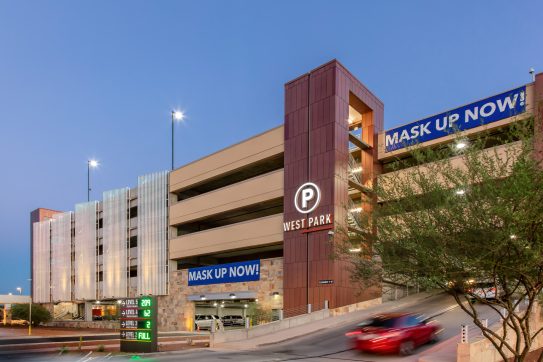 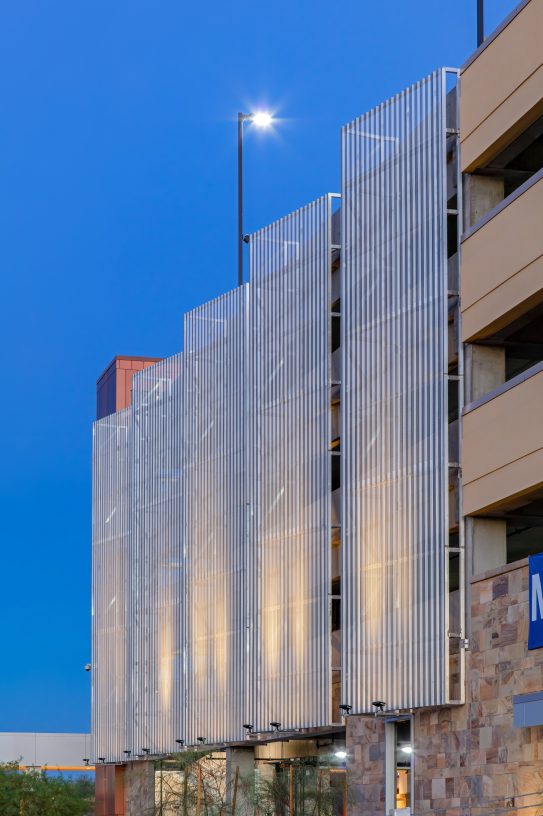 If you’re a fan of the paintings of Georgia O’Keefe, you’ll know deserts are hardly the barren, colorless environments they’re often portrayed to be. Instead, they often are wrapped in unique palettes that can shift dramatically throughout the day. Designers of a new Phoenix area casino drew on this chameleon-like characteristic as they developed the “dynamic earth” theme that became a touchstone for their plans. They even carried that idea through to the parking garages that flank both sides of the casino’s main structure, incorporating perforated panels that are graze-lit by color-changing fixtures to create a welcoming environment for arriving guests.

The Desert Diamond West Valley Casino in Glendale, Ariz., is one of three owned and operated by the Tohono O’odham Nation. The new structure replaces a much smaller casino that was built as a temporary facility while plans for this $400 million casino and resort, featuring a 75,000-sq.-ft. gaming floor, were developed. Rob Jurbergs, AIA, a principal and senior architectural designer with the Memphis office of project architects HBG Design, notes the garage’s perforated metal panels were seen as important visual elements from the beginning.

“The metal panels were always intended to be reminiscent of, and inspired by, the intense and brightly colored, changing desert sky,” he said. This was intended “to contrast against the more earthen/grounded elements, such as the stone base and copper-hued, green-patinaed smooth metal panels.”

The panels are mounted on frames that angle out 15 degrees from the parking deck walls to both enhance ventilation to the interiors and create greater visual interest and depth for a building type that rarely receives much attention. “The light of the desert is part of the color of the panels, themselves, when the silvery metal reflects theses hues,” Jurbergs says. “The galvanized substructure of the design is yet another architectural element that performed to add shadow and visual reading of either more solid or more transparent linearity to the design with our lighting effects.”

Installers with Tempe, Ariz.-based Gen3 Arizona turned to Petersen when it came time to specify materials for the garage screening. Specifically, 25,000 sq. ft. of the company’s perforated 7.2 Panels were ordered in .040 aluminum with a Silver finish. The company’s project manager, Andrea Godinez, says time wasn’t always on her team’s side as they worked to make up time lost to delays that occurred before their turn at the jobsite.

“The biggest issue we had was time – we didn’t have enough time,” she says. This meant “long days, overtime, working weekends and doubling up on crews when we could.”

Petersen provided support throughout the project’s design and construction. “There were multiple submittals, mock-ups and shop drawings as part of our review and pre-construction process, including a large, in-place mock-up that we used to test different lighting effects,” Jurbergs says. And Godinez calls the company “super helpful” in getting materials to the jobsite when they were needed, given the aggressive schedule Gen 3 was facing.

Both the architect and installation project manager agree the finished project was worth the added attention to detail. “The garage designs are especially successful, in that the overall design of the garages is additive to the enjoyment of the overall resort experience,” Jurberg says – a sentiment Godinez echoes. “Overall it came together really well,” she says, ‘it’s one we’re really proud of.”