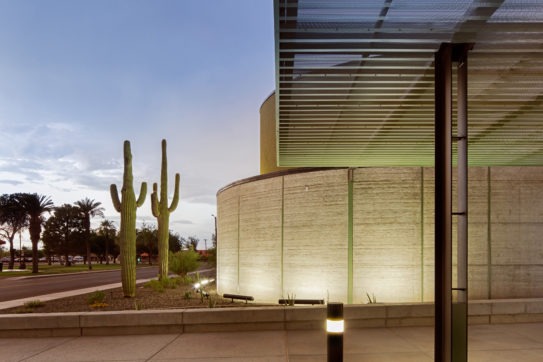 For decades, citizens of Eloy, Ariz., often had to make multiple trips to conduct their regular business with the city. Space limitations meant city offices were located in different facilities. So, getting a building permit could mean a trip to the Planning and Zoning office, followed by a drive across town to pay permit fees at the Finance Department. A new $7 million city hall has placed all departments together under one roof, with an architectural design inspired by the local history and environment.

Located halfway between Phoenix and Tucson, Eloy’s history is tied to that of the Southern Pacific Railroad. That company built the first railroad line across southern Arizona in the late 1870s, which was called the East Line of Yuma. A siding and section house were added in 1902 and named Eloy – an acronym formed by the line’s abbreviation. Since then, the town’s permanent population has grown to approximately 11,000, but it’s growing fast. That number is expected to almost double by 2025, and more efficient city operations will be critical to manage coming development.

Designers with SmithGroup’s Phoenix office drew on the surrounding desert’s muted color palette, along with the town’s strong railroad history, in their plans for the new city hall. The sand-toned, cast-concrete walls feature panels segmented by vertical I-beams as a railroad-track reference. A curving, EIFS-based wall element adds a pop of muted color, in a hue that seems a close match to that of the saguaro cactus native to the region.

“That was one of the influences – they really like the cactus – along with their agricultural history,” says Stacia Ledesma, a SmithGroup designer on the project. A similar Aged Copper finish was chosen for the two entry canopies fabricated from perforated .050-gauge aluminum PAC-CLAD 7.2 panels from Petersen. These canopies serve dual functions, according to Ledesma.

LED lighting is incorporated into these perforated panels, to add even more visual interest after the sun goes down. “It’s very subtle, and it actually blends in really well with the profiled panels,” Ledesma says.

Given how nicely the canopies’ finish blends with the EIFS wall element, it might be surprising to learn it was the design team’s second choice. “We initially were going with Corten metal, but we couldn’t afford that,” Ledesma says, adding that her familiarity with Petersen’s PAC-CLAD architectural metal lineup gave her confidence the backup plan would be successful.

“I knew the PAC-CLAD finish wouldn’t rust,” she says. “And the Aged Copper worked as well, so it was really about the color.”

Installers with Tucson-based Progressive Roofing had a couple of challenges getting the panels into place. As project manager Bill Quinney explains, the panels were installed on the underside of the canopies’ framing structures, instead of on top, as is usually the case. This meant the panels had to be held up, from underneath, as they were screwed into place. “The screw placement had to be precise, because you would be able to see all the screw heads.

The panels’ perforations complicated this effort, Quinney says. “Because the panels are perforated, they’re less rigid, so there was a higher risk of them being damaged as the guys were holding them up.”

Fortunately, according to Ledesma, the extra attention has paid off in the end. “I think everybody’s pleased with the results,” she says. “And they’re proud of their new building.”