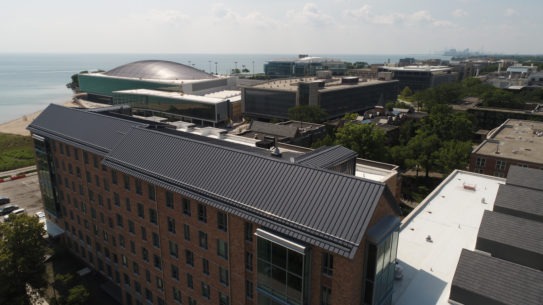 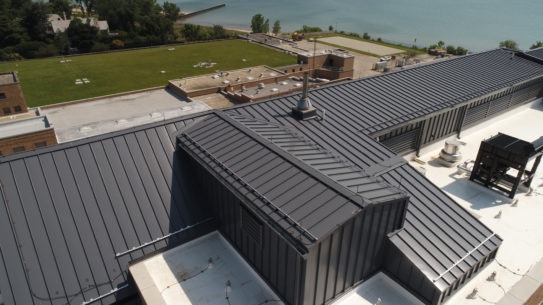 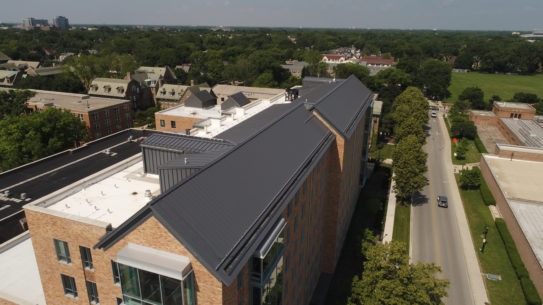 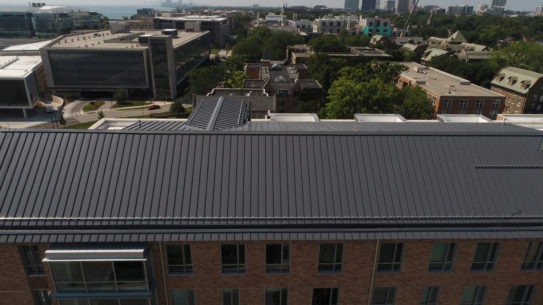 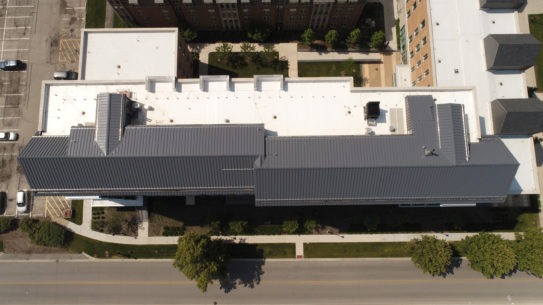 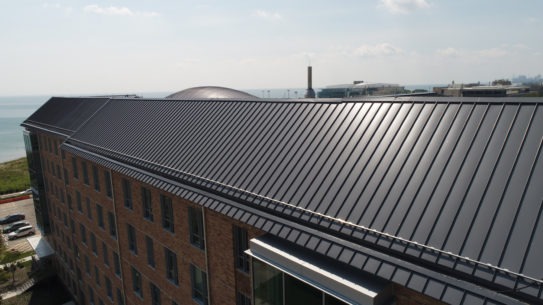 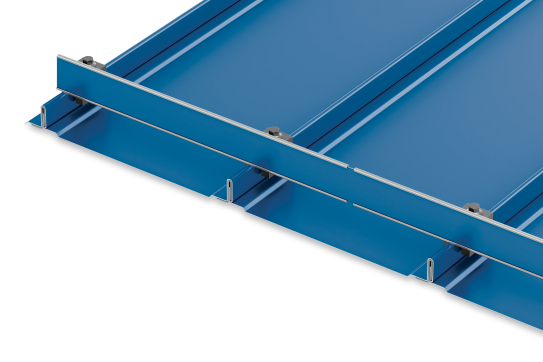 “Collegiate Gothic” isn’t an architectural style one typically associates with metal roofing. Clay tile, slate, or even standard asphalt shingles would be the more frequent choice. But for a new seven-story university residence hall on the shores of Lake Michigan north of Chicago, high-performing metal panels were the architects’ material of choice. They knew the exposed, steep-sloped gables would need to stand up to more than their fair share of severe winter weather and icy Lake Michigan spray.

Known as 560 Lincoln for its Evanston, Ill., address, the building was the first new dormitory Northwestern University had built in a dozen years when it opened. It’s also the first in a series of residence hall construction and renovation projects described in a 10-year master plan meant to transform housing for the campus, which roughly 60% of the school’s 8,200 undergraduates call home.

The design team included Boston-based William Rawn Associates and the Chicago firm of Sheehan Nagle Hartray Architects. They were charged with upping the amenity level for the 140,000-sq.-ft. residence hall, intended to house 422 students. Large, double-height lounges are included on each floor, offering views of the lake. Ground-floor common spaces incorporate an interior courtyard, with flexible function rooms that serve several other nearby dorms, as well.

The roof’s steep gables echo those of some of the surrounding residence halls and fraternity houses that date back to the 1930s. They also emphasize the height of the building, the tallest on the campus. They’re clad with more than 11,000 sq. ft. of 22-gauge steel Snap-Clad panels, from Petersen’s PAC-CLAD line, in a Charcoal finish. Additionally, the roofing pros from Streamwood, Ill.-based Progressive Dynamics Inc., also installed a snow retention system to help protect students passing below from rooftop avalanches.

The school’s students and alumni can appreciate that installers called the weather their biggest challenge – the schedule called for the panels to be installed in the middle of the winter. That area of Northwestern’s campus is notoriously exposed to arctic winds, which locals call “the hawk,” coming off Lake Michigan.

Superior metal quality is a top reason Snap-Clad panels were specified, Leonard says, along with “the formability of the material, which is just the right tensile strength.” He also notes his long working relationship with Petersen. Leonard says he has worked with the company in various roles since the 1980s, and he appreciates the sense of continuity he has experienced over the decades, noting “most of the guys I started working with are still there.”

Petersen also is an organization Leonard says he can trust. “Their sales team is so easy to work with and the pricing they give is spot-on, with no hidden costs,” he says. “Petersen is like a one-stop shop.”