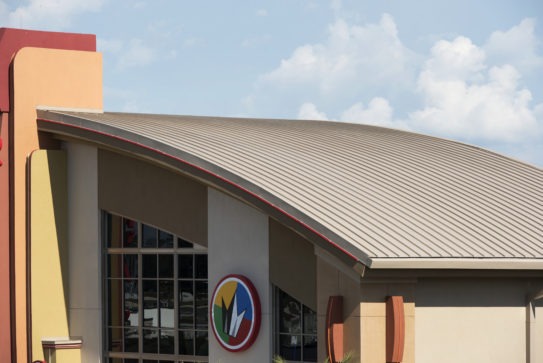 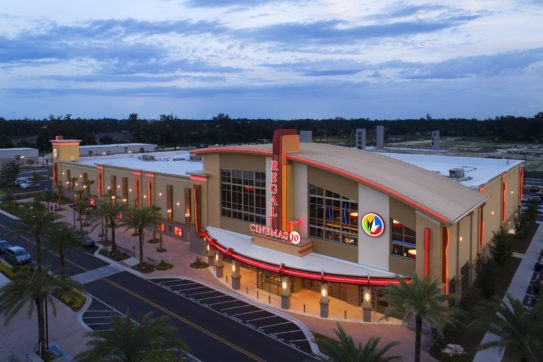 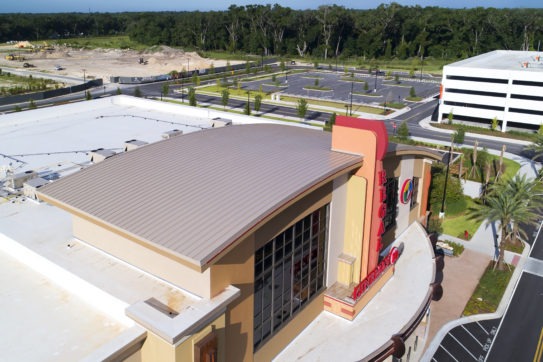 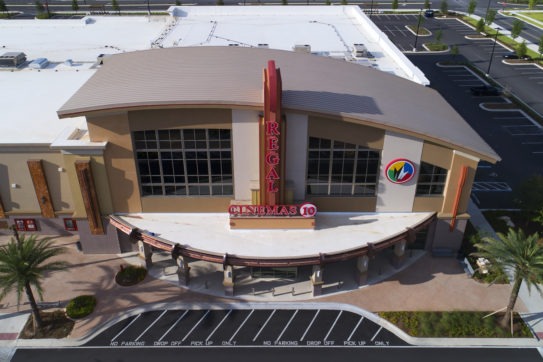 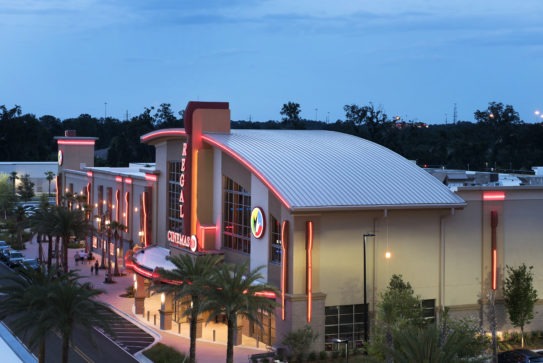 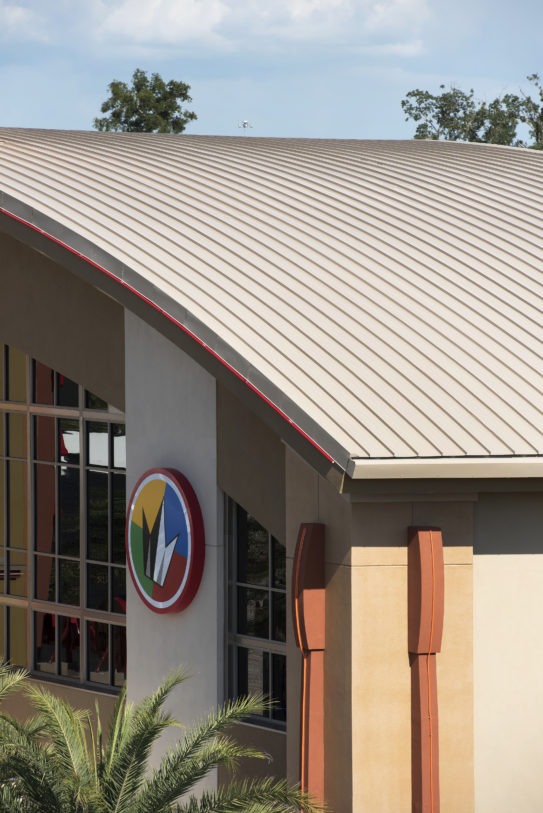 Residents of Gainesville, Fla., are thrilled with the arrival of Celebration Pointe, a new, mixed-use development that will span 160 acres and more than 1 million sq. ft. of retail, office and residential floor space when completed. The 10-screen Regal Cinemas movie theater has become an anchor in the development, and the sweeping metal roof over its entrance certainly helps it stand out among the surrounding stores and restaurants.

Architects with the RLS Design Group of Birmingham, Ala., wanted to ensure that the sense of arrival the roof creates had no interruptions, so they specified that the 6,200 sq. ft. of PAC-CLAD Tite-Loc-Plus panels from Petersen be fabricated and installed as continuous curves. Working with the resulting 160-ft. panel lengths, made of 24-gauge steel finished in PAC-CLAD color Sierra Tan, proved demanding for installers with Gainesville-based Perry Roofing – who also did the larger flat TPO roof over the rest of the building – but they lived up to the challenge. Perry worked with Gainesville distributor ABC Supply on the project.

“The metal portion was not very big, but obviously, in complexity it was pretty significant,” says Austin King, Perry Roofing’s senior estimator on the project. He notes that his firm called on the expertise of ANCO Roofing Systems of Fort Myers, Fla., to form the panels’ curves. A little creativity also was required when it came to getting the formed panels up to the roof.

“We had to make an engineered assembly that pretty closely mimicked the same arc as the panels,” King says. “It was a 200-ft. piece of rigging. We ended up taking up one or two panels at a time. It’s not something we had used before and haven’t used since.”

While an adjacent parking lot gave the Perry crew room for staging the panels and rigging, the installation effort impacted the work others were doing to get the theater ready for moviegoers. “It shut down other trades,” King says, noting that landscapers had to undo some of the work they’d already done to allow clearance for the crane and rigging. “They had to pull up some of the palm trees they’d already planted.”

While, according to King, metal roofing isn’t a huge part of Perry Roofing’s business, when the material is specified, it’s almost always PAC-CLAD. “We do 99% of our metal roofing with PAC-CLAD,” he says. “It seems to be becoming a commonly specified system. We know the product line and are comfortable with the details.”

The theater has opened its doors to customers while the larger Celebration Pointe development continues to expand. A 70,000-sq.-ft. office building recently opened and a townhome development is now under construction. King considers the project to be a big step forward for Gainesville.

“It’s a new type of development – a much larger development,” he says. “It’s a point of pride – it signifies a big change in the city and how we’re growing.”