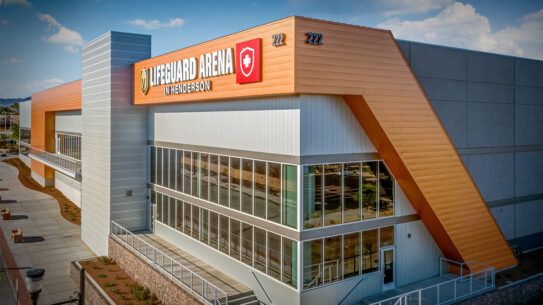 New hockey training facility brings skating to the desert, and a cool façade, too A bit like Triple-A baseball teams, teams in the American Hockey League serve as a steppingstone for hockey players seeking to 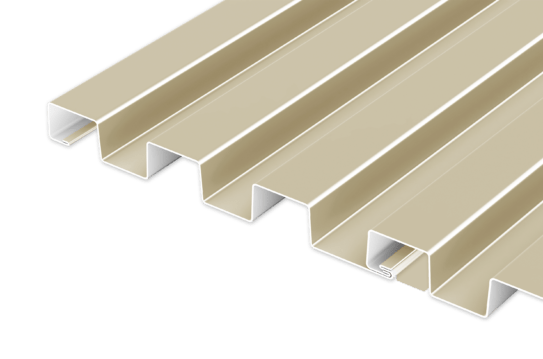 New hockey training facility brings skating to the desert, and a cool façade, too

A bit like Triple-A baseball teams, teams in the American Hockey League serve as a steppingstone for hockey players seeking to make their way up to the rinks of the National Hockey League. That’s the role the AHL’s Henderson Silver Knights are filling for the Las Vegas Golden Knights as this latest NHL expansion team builds on the already impressive record of success established since its players first hit the ice in October 2017. Now, the Silver Knights team has its own new practice facility in downtown Henderson, to go with a brand-new home game facility. Called “Lifeguard Arena,” the structure features a dynamic façade design that makes good use of the bold imagery that metal panels can bring to building exteriors.

The City of Henderson contributed $15.5 million to the arena’s nearly $26 million construction cost, and its two professional-scale rinks are open to the public when Silver Knights players aren’t using them. This investment was seen as part of a larger plan to reinvigorate what’s known as Henderson’s Water Street District. As such, city planners wanted to ensure the exterior carried visual appeal from all directions.

“It was very important to the city to have a four-sided architecture, meaning that each elevation of the building is equally important, relative to aesthetics and relationship to its neighbors,” says Arnie Martinez Jr., AIA, vice president with the Las Vegas office of project architects Leo A. Daly. “It also needed to relate to its brand and to its use.”

Metal wall panels became a key contributor to both branding and the project’s budget when planners turned to developing the façade’s materials palette. Daly designers opted for a mix of panel profiles in two colors – a silver finish that offers a neutral background for a vibrant band of copper – to create a sense of varying volumes on the exterior of what’s essentially a big box.

“The contrasting profiles of the panels work in a very cohesive and complementary manner to create a striking and prominent building,” Martinez says, noting that three different profiles were combined on the central, protruding tower, with the reveals forming a repeating pattern of horizontal stripes that balances the vertically hung flush panels and curtain wall behind it.

Working with installation contractor Sierra Metals Southwest, LLC., Martinez’s team selected Petersen as the panel supplier. The chosen products from the PAC-CLAD line included the company’s Flush panels – 7,200 sq. ft. in Copper Penny and 5,190 sq. ft. in Silver – along with 4,487 sq. ft. of 7.2 panels and 2,424 sq. ft. of Box Rib panels, all in Silver. Martinez says that the project benefitted from the close ties Sierra Metals’ team had with its Petersen contacts.

“They were very familiar with Petersen and had a direct relationship with them, so they were able to assist us as needed in working out details or other issues,” he says. “The experience was a very productive and collaborative process, and that is evident in the finished product.”

The facility opened its doors to Silver Knights players – and to local skating enthusiasts – in spring of 2021, and Martinez says the goal of using the new building to spur redevelopment in Henderson’s downtown is already being met. “Lifeguard Arena was the catalyst of the city’s revitalization effort for downtown and it has created a tremendous amount of energy and renewed interest,” he says. “It is a very prominent and visually striking building that has been fully embraced by the community.”