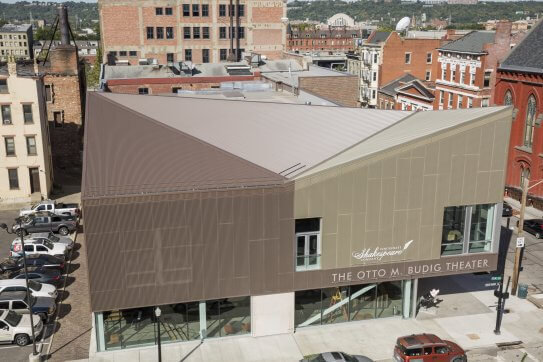 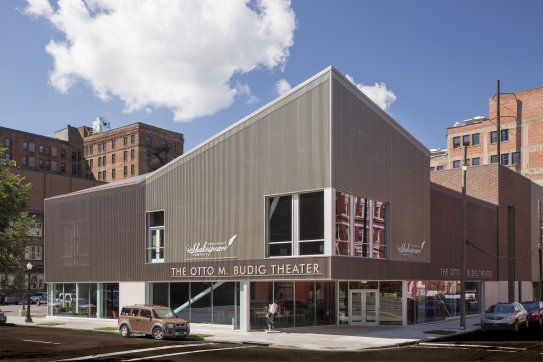 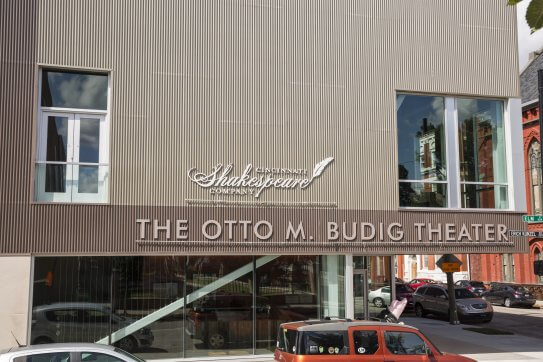 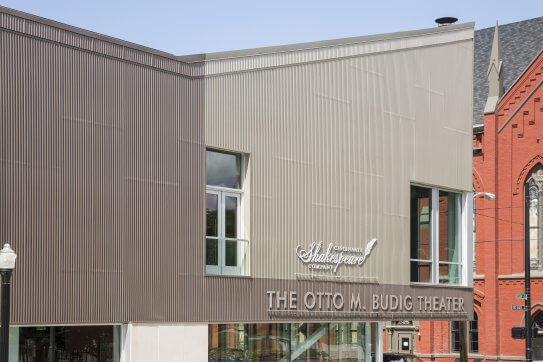 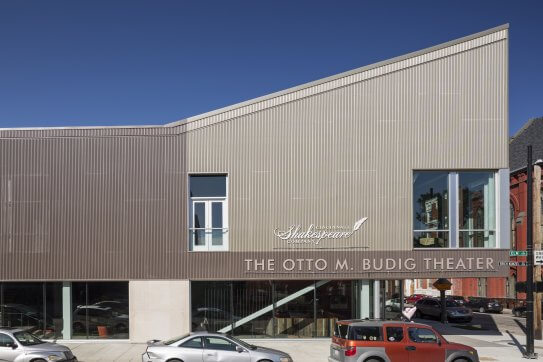 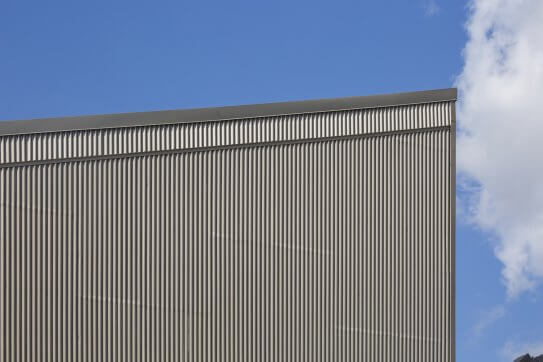 With its many subtle yet creative nods to Shakespeare and all seats 20 feet or less from the stage, the Cincinnati Shakespeare Co.’s new Otto M. Budig Theater may be as unique inside as it is outside. Now with a seating capacity of 250, CSC moved from a cramped, dark space to a brand new building nestled in the heart of Cincinnati’s growing cultural arts corridor.

Designed by GBBN in Cincinnati, the exterior of the 38,000-sq.-ft. building is defined by uniquely intersecting metal roof and wall panels that capture the creative spirit of the Shakespearean theater yet provide a modern, engaging look in the midst of the historic setting.

Mary Jo Minerich, a GBBN designer who worked extensively on the project, said, “Cincinnati Shakespeare Company performs classical theater for contemporary audiences, and that’s why a contemporary design was appropriate. As we considered the exterior of the building, we also wanted to be sensitive to the historical context, harmonious with the surroundings, and design a structure that would be seen and felt as something different while meeting the budget constraints.”

The design of the structure required review and approval by Cincinnati’s Historic Conservation Board. “The shape of the building and the roof slopes connects to a number of other structures in the historic area,” said Steve Karoly, a GBBN project architect who also was an integral part of the project. “And there are a number of other metal applications and influences in the neighborhood that relate as well.”

While the use of corrugated metal has become popular in contemporary architectural applications, the design team felt the need to be creative in its description of the product. “We were attracted to the undulation of the material and the lightness that the perforation offered. We needed to help people get past the perception that corrugated was industrial or agricultural,” Minerich said. “We created a wall mock-up that allowed people to experience the effect of the perforations in person. It was one of the most compelling factors in getting Board approval.”

Project architect Steve Karoly commented further about the PAC-CLAD corrugated metal. “Given the type of appearance we wanted and our budget, metal was a given from early on in the design process,” Karoly said. “We considered other materials but didn’t think they would be optimal for this project.” Designer Mary Jo Minerich added, “Once we settled on the corrugated metal, we spent a good deal of time refining the perforations and the detailing. To elevate the level of quality, we designed with a high level of detail and made many trips to the site to ensure our design intent was realized.”

The general contractor, Messer Construction, recommended the use of the PAC-CLAD Corrugated Panels and oversaw interaction with separate installers for the roof and walls. The perforated walls panels were installed by ProCLAD Inc. in Noblesville, Ind. The roof panels were installed by Tecta America Zero Co. in Cincinnati. “The greatest challenge was the postage-stamp size site surrounded by other buildings and power lines,” said Matt Gennett, senior project manager and vice president of Tecta America Zero Co. “Staging material was problematic, as traffic was heavy and parking space was at a premium.”

The corrugated panels were installed with matching edge metal. “It’s not a complicated panel to install and they look really nice,” Gennett said. “The hips and valleys and intersecting planes did create some interesting transitions, however. To the right of the valley was one color and to the left was another, so we had to match the color with our coping. We also had to pay attention to how the siding was being installed so we could match the metal to the siding and follow the transitions from color to color.”

Once the perforated wall panels were installed by ProCLAD, the Tecta crew did the transition metal, Gennett recalled. “We had to make sure everything lined up perfectly.” All coping and flashing was fabricated at Tecta’s shop.

The perforated wall panels cover expansive windows that create an inviting effect and allow the community to see what’s going on in the theatre. “Whether it’s classes or performances or the coming and going of the actors, the interaction has created a real presence for the theater in the neighborhood,” Minerich said. Steve Karoly added that, “as day changes to night, the lights from inside really show well through the perforations.”

The GBBN team, which included theater planners Schuler Shook, paid particular attention to interior design elements to deliver a unique, intimate theater experience. With only six rows of seats, audiences and actors engage and energize each other. The theater abounds with subtle yet creative design references to Shakespeare. For example, 38 steps—one for each of Shakespeare’s plays—ascend to a second-floor rehearsal and event space. Materials reflect CSC’s passion and personality. Reclaimed wood references Shakespeare’s original Globe Theater; mirror fragments embedded in the concrete floor glint underfoot; and fabrication marks of rolled steel are left visible as a reminder that CSC makes something new with every performance.

Reaction to the design of the theater—both inside and out—has been outstanding. “I think the final project is a wonderful combination of everything we wanted artistically and everything we wanted for our patron experience as well,” said Brian Isaac Phillips, the Cincinnati Shakespeare Co.’s producing artistic director.

“One of the guiding principles of the design was to show all of the materials in their true form,” Minerich said. “We didn’t cover anything up. We wanted to enhance the existing elements—the steel, the concrete—to show their inherent beauty.”

Selection of Petersen’s PAC-CLAD Corrugated Panels for the highly visible roof and wall applications helped contribute to the success of the project by meeting design criteria as well as budget constraints.

NOTE TO EDITORS: If photos are published, the following credit must be included: “Photos: © Josh Beeman”