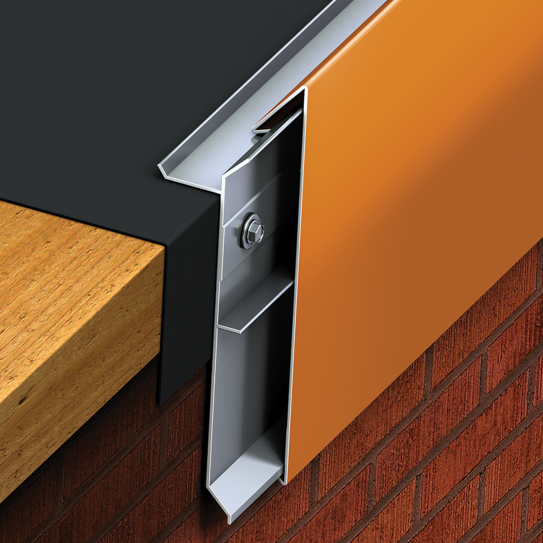 You might not have heard of Sevier County, Tenn., by name, but you’ve most likely heard of at least a couple of its major attractions. Located near Knoxville, in the northern part of the state, it’s home to both a good portion of the Great Smoky Mountains National Park – the most visited in the national system – and Dolly Parton’s famed Dollywood theme park. A big draw for both these locations is the downhome appeal of Southern hospitality, a quality illustrated in its local gas utility’s new employee center. The facility, which is designed to serve the broader community as much as its own employees, uses its metal roof as a calling card, because nothing says “natural gas utility” more obviously than 13,500 sq. ft. of metal panels finished in gas-flame blue.

Based in the county seat of Sevierville, the Sevier County Utility District (SCUD) serves more than 14,000 customers in Sevier and adjacent Blount counties. When the utility, which is also an agency of the county’s government, determined it needed a new employee training facility, it decided the new structure should offer amenities to the broader community, as well. Located on a larger campus of other utility buildings, the 9,500-sq.-ft. center provides a commercial-quality kitchen and a multifunction area that are available to area organizations for meetings, parties and other gatherings. According to A. J. Heidel, AIA, an associate with the project’s Knoxville-based designers, BarberMcMurry Architects, establishing a sense of welcome was a priority from the start.

“Sevier County Utility District wanted a building that would be inviting, attractive and be able to accommodate a wide variety of events when rented out,” he says. “When people drive up and see this building, we wanted them to see a design that was thoughtful of its surroundings yet has a presence that stands on its own.”

Heidel explains that the facility’s metal roof helps define its two primary volumes, the first housing offices, conferences rooms, catering kitchen and hallways and the second, which is entirely given over to the multipurpose assembly space. “The first, lower volume, is characterized by a standing seam roof that wraps from the base of the walls, up and over to the opposite ground,” he says. “The second volume is accented by a high, blue butterfly roof held up by an exposed steel structure. This roof matches the existing buildings on SCUD’s campus and ties back to the utility’s branding elements of the blue natural gas flame.”

Metal was the design team’s roofing material of choice from the beginning, Heidel says, “because its material properties allow for a range of colors and ribbing patterns, and because of its ability to act as a wall cladding as well as roof. We were able to give different characteristics to separate volumes by changing from blue, smooth, flat-lock panels to musket gray ribbed panels, while maintaining a similar method of installation.”

However, initial plans had called for the metal panels to be insulated, an idea that butted up against budget concerns. “The owner-architect-contractor team determined the standing seam metal panels, with a more traditional wall assembly, were more cost effective,” Heidel says. “We knew from the outset that this change might happen, and we think the end result serves well as the exterior cladding.”

To supply the standing seam products, the installers with Knoxville-based Baird and Wilson Sheetmetal suggested three different profiles from Petersen’s PAC-CLAD line. These include 3,500 sq. ft. of Snap-Clad panels in Musket Gray, along with 13,400 sq. ft. of Tite-Loc panels and 2,500 sq. ft. of Flush panels, soffit and fascia, all in Berkshire Blue. All the panels are 24-gauge steel.

Construction took place over the winter, and weather conditions posed some challenges for Baird and Wilson’s installation pros. “We had to do a lot of it during the cold weather, and it was really windy out there,” says company vice president Jim Galbraith. “Because we had to lift everything up on a crane, we just had to wait for the wind to calm down.”

The new center has been well-received since it opened its doors, Heidel says. “We work with every one of our clients to find a design that fits their brand and reflects their use, and that is fully functional as well as beautiful. That outlook is reflected in this project through the overall design and the creative use of materials.”

Galbraith echoes Heidel’s comments when asked about the finished job. “Everybody loves it,” he says, simply, adding that the project has earned one outside honor that underscores its success. “Petersen put it in their calendar, so it must’ve gone well!”