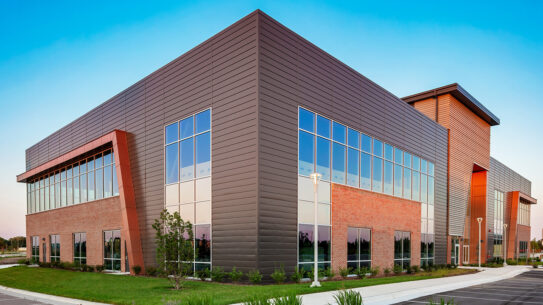 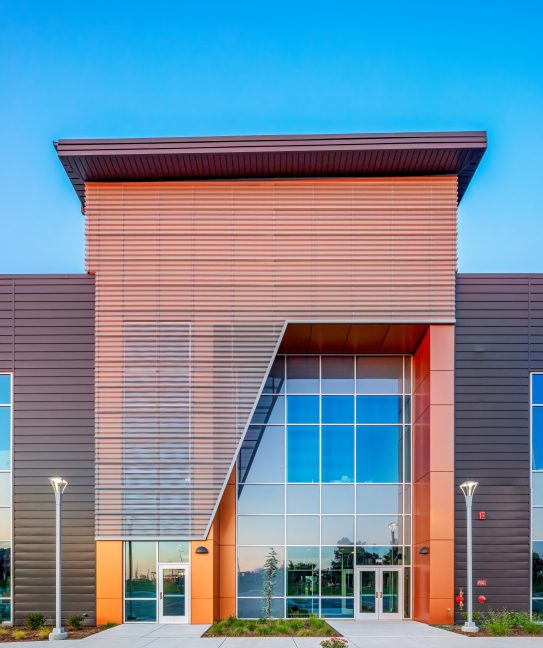 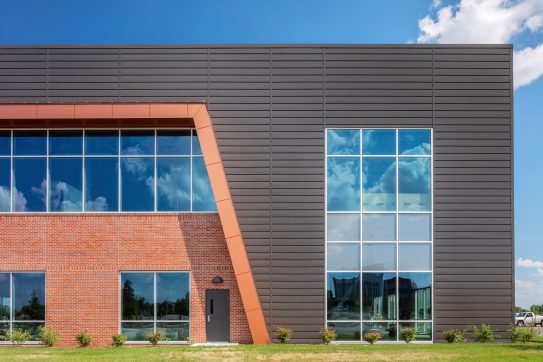 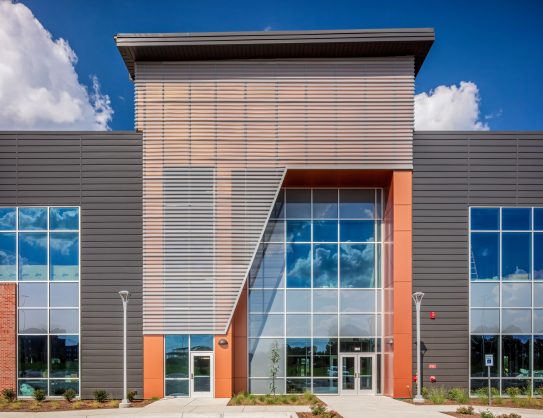 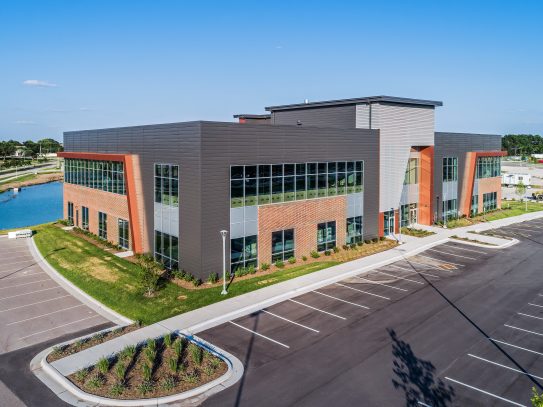 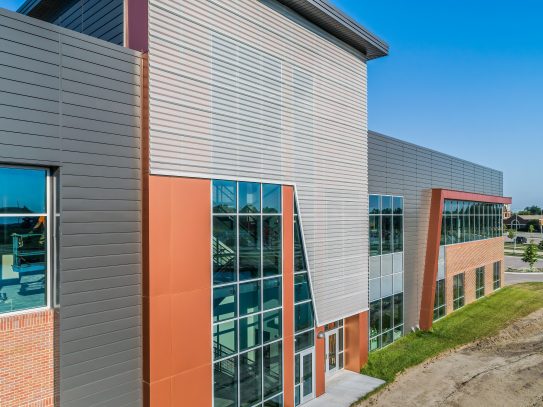 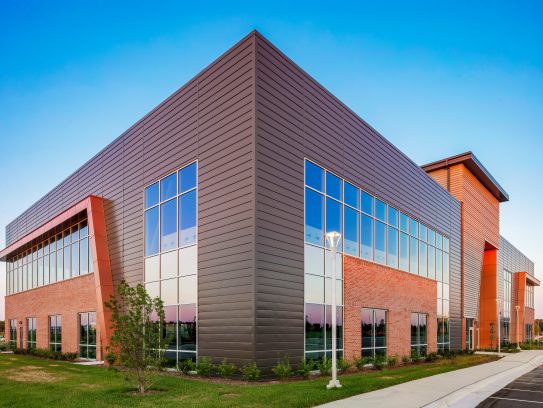 The latest addition to Wichita State University’s aptly named Innovation Campus is, itself, a model of innovation – specifically, manufacturing innovation. Dubbed “The Smart Factory,” the structure, developed by the leading consulting firm Deloitte, incorporates a manufacturing line designed for easy reconfiguration to give visiting clients an idea of how the industrial internet-of-things could aid their own assembly operations.

Designers of this forward-looking facility faced the challenge of highlighting its unique functionality while also supporting visual continuity of its exterior with the rapidly growing collection of surrounding buildings. A common palette of materials – including architectural metal wall panels in two shades of gray – tie the structure to its surroundings while also supporting its individual identity.

Wichita State University in Wichita, Kansas, began developing its Innovation Campus on the grounds of a former golf course a decade ago as a way to partner more closely with industries in the area. It has grown into a mixed-use development with tenants ranging from Airbus and the National Institute for Aviation Research to university engineering labs and even student dormitories. Even among other purpose-built industrial research facilities, though, the new Smart Factory stands out due to Deloitte’s unique ambitions. The company had a vision from the beginning of the kind of space it needed to bring those ambitions to life.

According to Matt Cortez, president of GLMV Architecture, the hometown firm that designed the building, Deloitte was specific in wanting a three-story central core with two-story wings on either side. Interior space was needed to be open and well-lit to provide room for mocked-up production lines and also support easy interaction between its own staff and clients, along with other closely aligned tenants occupying leased space in the building.

At three stories, The Smart Factory already stands out among the primarily 2-story structures around it. “That set it apart, from a volume standpoint,” Cortez says. The mix of masonry, metal and glass relates well to the rest of the campus, but the added perforated metal panels surrounding the entrance emphasizes the building’s height and adds a bit of visual drama.

“That gave a different look and shadow line,” Cortez said. “We wanted to show that we knew what the concern was of a smart factory – ‘How can we make minor adjustments to the kit of parts?’ – and we wanted to make sure when people drove up, they knew that this was something different.”

To supply the majority of the metal panels, Cortez’s team turned to a familiar partner, Petersen, which had also fabricated panels used on a previous Innovation Campus project, Partnership Building #3 [read more about that effort here]. In all, GLMV’s plans called for 15,000 sq. ft. of Petersen’s PAC-CLAD Reveal panels in 22-gauge steel with a Graphite finish and 3,400 sq. ft. of .050-gauge aluminum 7.2 panels for the perforated screening. Not shown in these photos, an additional quantity of Petersen’s 24-gauge flat sheets in a Terra Cotta finish were fabricated into metal panels to carry the exterior theme into the lobby.

Mahaney Group, also from Wichita, did the fabrication and installation – as they had for the previous Innovation Campus project. Kyle Harryman, the company’s vice president, says his crew did some hustling to meet timeline requirements.

“This project had an extremely challenging schedule,” he says. “We were able to complete 100 percent in nine weeks, including punch-list items. It was an amazing accomplishment, considering we installed more than 25,000 sq. ft. of metal panels. We worked six days per week the entire nine weeks, but we were able to pull it off. Trying to coordinate everything with other trades – who were also in a hurry – was definitely a challenge. But we have experienced and hard-working crews, fabricators and superintendent.”

The reaction to the finished project has been very positive, with Deloitte using the facility as a real-world example of its expertise in industrial design. “They are promoting it to the outer limits, as fast as they can,” Cortez says, noting he’s heard nothing but positive comments. “It’s a global thing for them – they’re bringing in partners from all over.”