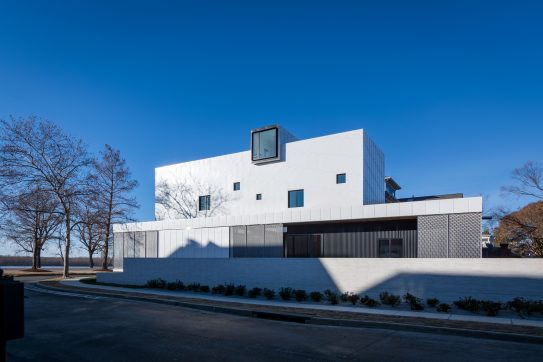 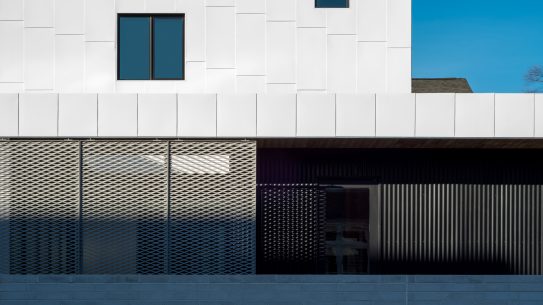 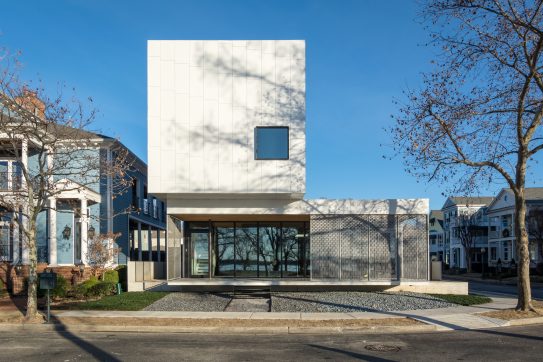 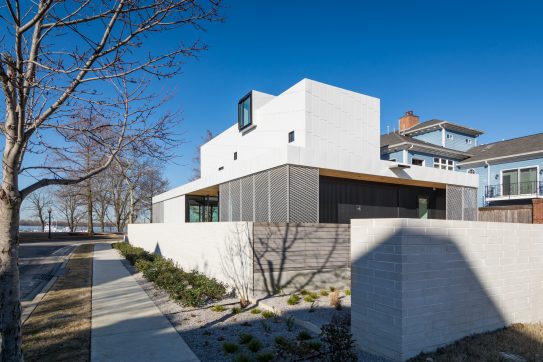 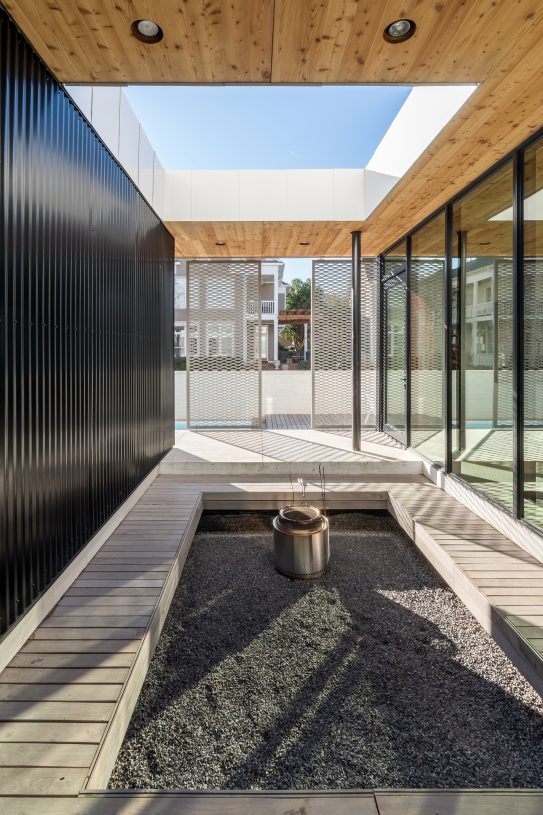 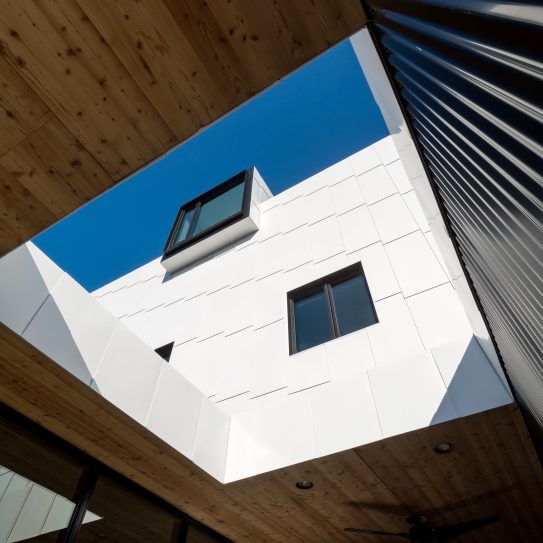 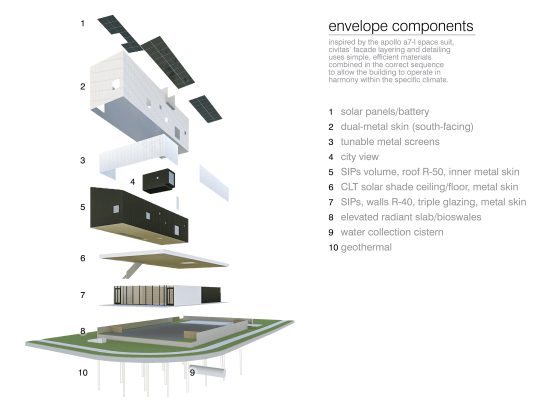 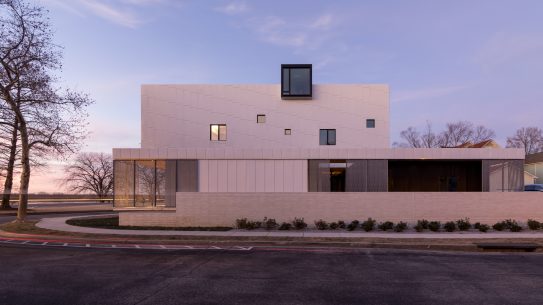 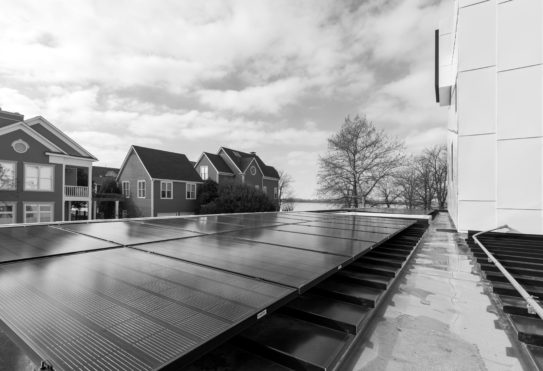 Sited within a New Urbanist neighborhood of traditional-style homes – and across the street from Memphis’ Mississippi River shoreline – the new, very progressive Civitas makes a strong statement in its looks, alone. It’s also a high-performance residence, achieving multiple energy and environmental certifications. Aluminum wall and roof panels play a starring role in both its design and performance, by creating a hidden channel along the home’s most exposed façade that enables rainwater harvesting and supports passive cooling of the interior space.

The 2,800-sq.-ft. home was designed by the team at Memphis-based firm archimania and led by principal Barry Alan Yoakum, FAIA. Yoakum was his own client for this home, which he has since moved into, along with his wife and son. In addition to creating a living space where his family could thrive, Yoakum – who has sustainable design credentials that go back decades – also saw the house as an opportunity to answer a question he sees as particularly critical today: “How does a modern piece of architecture begin to solve the problems of the planet?”

While only time will tell how far this one house takes humans toward reducing their impact on the climate, it certainly has gained a lot of attention from others striving to develop such solutions. It has earned LEED Platinum certification and is one of the first U.S. homes to meet the goals of the American Institute of Architects AIA2030 Challenge a full decade ahead of that effort’s target date. It also is the first single-family home in the Americas to be registered as a Zero Energy/Zero Carbon home, according to standards established by the International Living Future Institute.

The materials Yoakum chose for the house were selected for their durability, with the goal of creating a home that would remain standing two centuries from now. To this end, long-lasting structural insulated panels (SIPs) and cross-laminated timbers were used for the structural system. When it came to the exterior wall system, Yoakum says aluminum quickly rose to the top on his list of options.

“We went through a process of energy studies, and aluminum started coming in” as a favored choice, he says. “If you install it correctly, it will last forever.”

Petersen was the supplier of choice for almost all the aluminum used in the project, supplying 15,200 sq. ft. of panels and sheet metal, including:

Yoakum worked closely with the installation pros at the local firm of Ralph Jones Sheet Metal in Arlington, Tenn., an archimania collaborator on several previous projects. Company president Gordon Jones helped Yoakum develop the unique façade system for the structure’s highly exposed southern elevation. The architect wanted a way to capture rainwater onsite, to both reduce stormwater impacts and minimize his family’s demands on the municipal water supply. He also didn’t want visible guttering to mar the home’s clean lines. Instead, he designed a rainscreen on this façade that allows rainwater to pass behind the exterior wall to ground-mounted guttering that then channels it to an underground storage cistern.

To develop this wall, Jones’s team first fastened the Snap-Clad standing seam panels to the exterior sheathing. The seams provided an attachment point for 4-in. Z-channels to create the needed gap through which the rainwater could pass. Galvalume M Panels then were attached to the other side of the Z-channels to create a substrate for attaching the flat-seam panels that Jones’ shop custom fabricated from sheet metal that also was supplied by Petersen. C-channels were installed around the wall’s periphery to create seamless corners and obscure the fact the south elevation walls actually extend 5 in. from the exterior substrate.

The home features roofs at two levels, which appear flat from street level but in reality feature Petersen’s Tite-Loc Plus panels installed at a 1/2:12 pitch. The roof panels provide a point of attachment for solar panels that generate electricity for both the home and the local utility. Low-rise parapets hide the panels from the street-level view, creating the illusion of flat roofs. Metal from another supplier was used to create the screens that move along rails (which Yoakum calls “scrims”) that provide shading and some visual interruption as Yoakum and his family reposition them around the first floor’s triple-glazed, floor-to-ceiling windows.

Of course, exploration played a big role in Yoakum’s design, which shows up in the installation of the custom-fabricated, flat-seam panels. Instead of simple rows, the architect wanted to use the panel seams to create an interplay of shadow and light across the monochromatic exterior. The resulting stair-stepped pattern makes for a more dynamic appearance throughout the day and year, he says.

“We studied about a dozen different patterns,” Yoakum says, adding that an early plan called for simple vertical rows. “It didn’t have the scale we wanted for the house – we really wanted to break down the scale. We didn’t want it to look like an industrial building.”

For Jones’ installers, this shingled effect meant added attention to ensure Yoakum’s vision was realized in the finished structure. “Your layout has to be correct – as long as you start the first few rows correctly, the rest of it is fine,” Jones says, noting that such extra care was required during every step of the installation process to meet Yoakum’s intent. “All of this had to be thought out. Every seam has a design point. Nothing was done without him thinking about it. I like this architecture – it’s challenging.”

This isn’t a first-time experience for either archimania or Jones in working with Petersen products. The two companies have collaborated on several other area projects incorporating the company’s metal panels, including the home of the Memphis Ballet. Plus, Jones’ relationship with the company goes back decades.

“The only metal we use is Petersen. We’ve been dealing with them since the 1980s,” Jones says. “We dealt with the same people then; it still has a sense of a small company. When I talk to them, they have the knowledge we need. I could count on one hand the warranty claims I’ve had on the paint finish, and Petersen’s always worked with me and taken care of it.”

Editors: If photos are published the following credit is required: Photos courtesy of archimania 2020. Additionally, the architecture firm’s name, archimania, is intentionally lower-case.