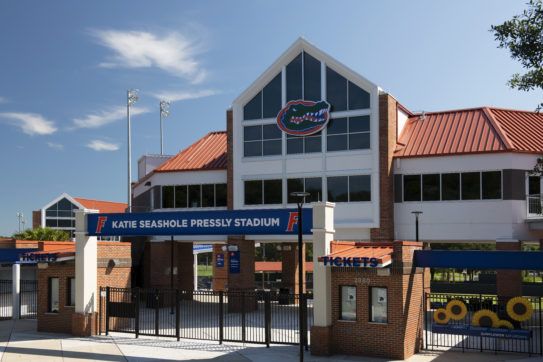 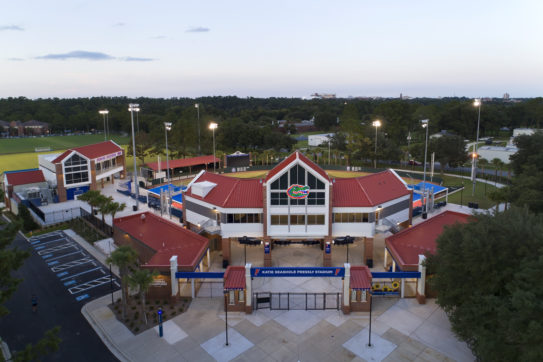 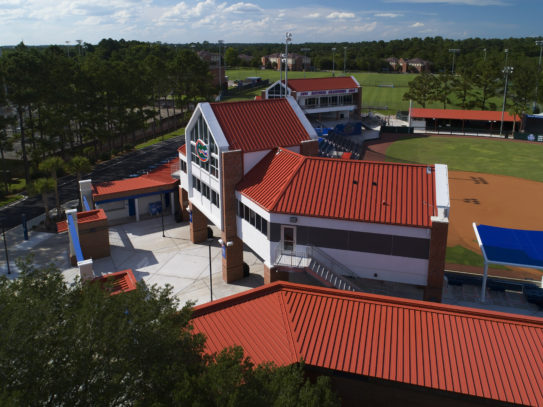 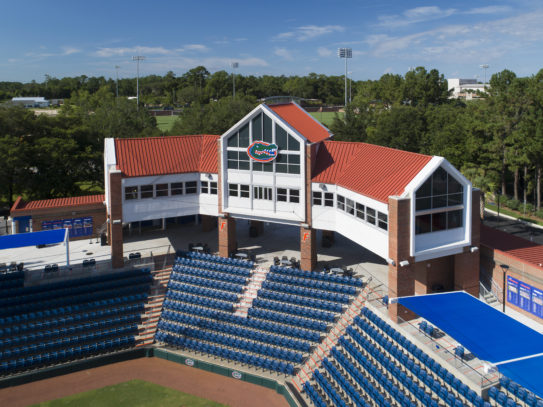 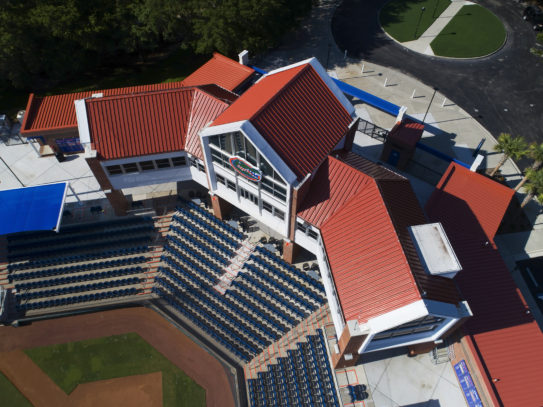 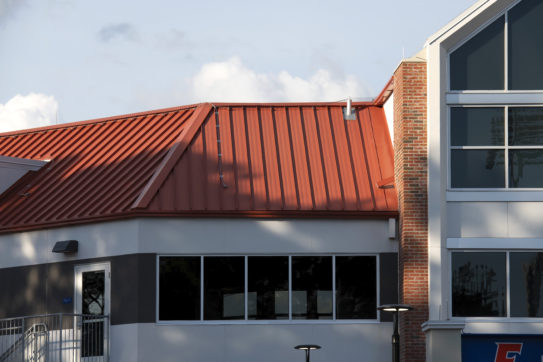 The renovated Katie Seashole Pressly Softball Stadium on the campus of the University of Florida in Gainesville might have all the latest amenities, but its design pays homage to the school’s earlier days. The facility’s steeply pitched metal roof in a signature orange-red finish is a clear reference to the buildings surrounding the stadium, and it also frames an impressive gateway into the ballpark’s friendly confines.

“The university is known for its collegiate gothic architecture and high-pitch, orange-red gable roofs,” says Joe Walker, AIA, president of Walker Architects, the local firm that designed the stadium. “This project ran with the roof as the character-defining element of the exterior, and the final design is a direct nod to the collegiate gothic style.”

The collegiate gothic roots most clearly are seen in the stadium’s signature entryway. In addition to tying the stadium to the surrounding campus, this two-story structure elevated on brick columns makes a statement all on its own for fans – as well as Gator opponents.

“From a fan’s perspective, the geometry of the roof signals the entryway and frames the impressive – and, for a visiting team, intimidating – first glimpse of the field,” Walker says. “For a player, when you look at the elevation of the facility from the field, the central gable is a centerpiece positioned directly over home plate.”

While officially a “renovation,” because the original 1996 field wasn’t altered, the upgraded facility has been largely rebuilt to include a new locker room, lounge training room and press box. According to Walker, the $15 million project is a tribute to the work head coach Tim Walton has done building the team into a national presence since joining the team in 2006. Since 2008, the Gators have made it to the Women’s College World Series eight times and have earned national titles twice.

Walker says metal roof panels were an obvious choice to create a visual link to the classic clay tiles that top many of the university’s older structures. “It was the product with the best look for the project price point and, aesthetically, it fit in well in this area of campus,” he says. “Plus, it has the benefit of being low maintenance and importantly, it does a great job of keeping water out.”

The architect specified 10,300 sq. ft. of Petersen’s Tite-Loc Plus in a Terra Cotta finish for the project. He says the choice of this particular profile was aided by advice from the company’s technical staff. “It was Petersen that suggested we use the Tite-Loc Plus product with striations, knowing it would be a better product for our project with respect to minimizing oil canning and damage from potential impacts.”

Jacksonville, Fla.-based Thorne Metal Systems handled the roof installation, which posed a few challenges, according to the company’s office manager Cody Thorne. “It was a particularly tight site – we could only work around the perimeter because they were working on the field,” he says, adding that the roof’s steep pitch also called for some extra attention. “It was 10:12, so a little more caution and safety were involved.”