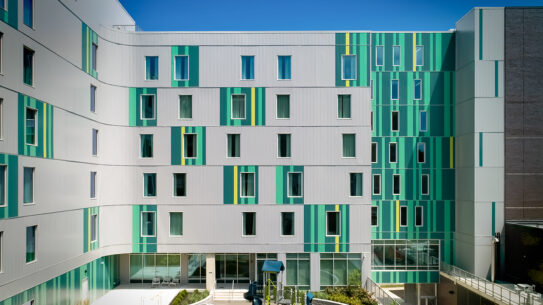 Especially in cities with prominent children’s hospitals, Ronald McDonald House Charities have become important resources for families with severely sick children. The organizations offer housing and meals to these families at no cost while their 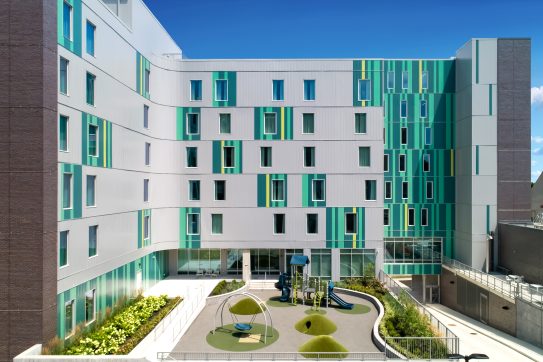 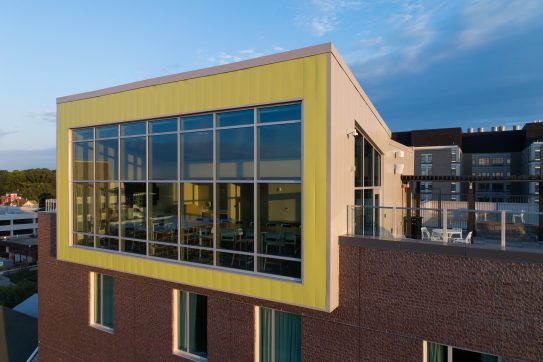 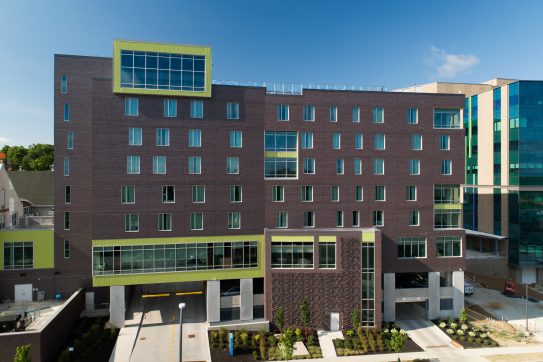 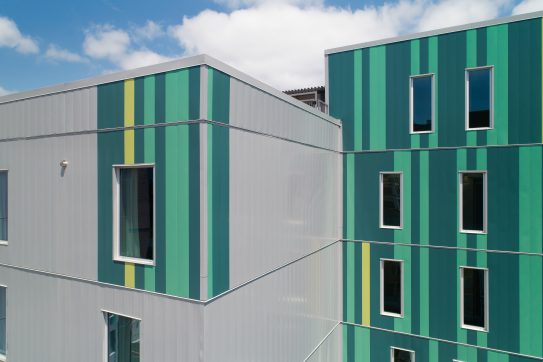 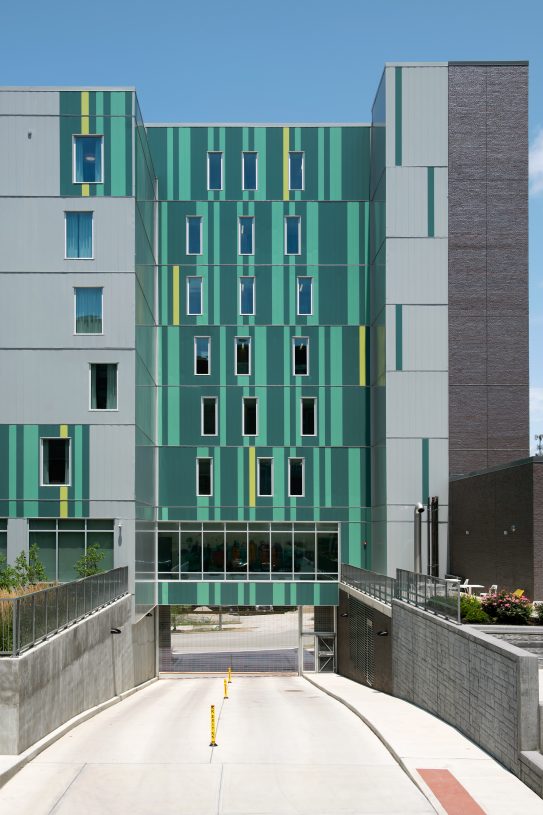 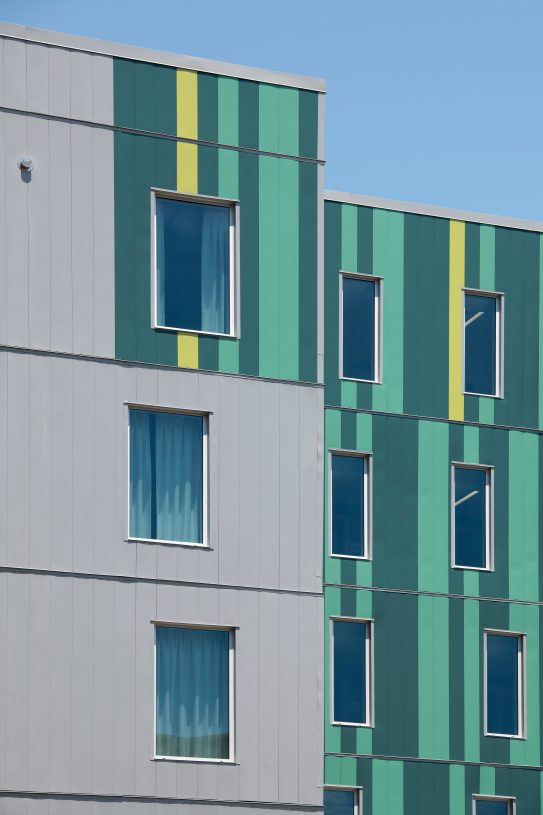 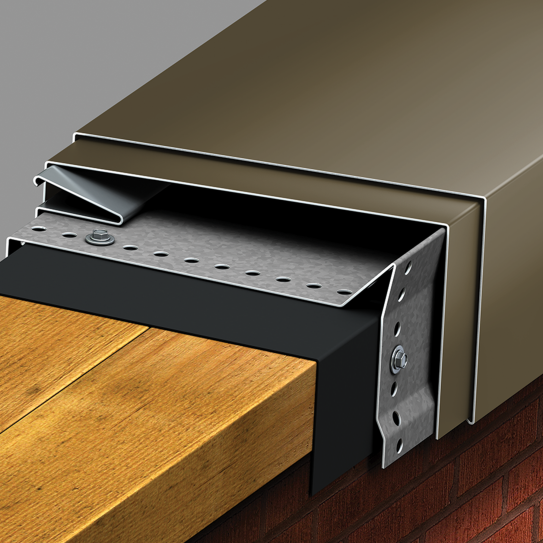 Especially in cities with prominent children’s hospitals, Ronald McDonald House Charities have become important resources for families with severely sick children. The organizations offer housing and meals to these families at no cost while their children are receiving medical treatment. It’s not surprising that these facilities often don’t have enough room to serve all who want it, which is why a number now are pursuing expansion. The most prominent of these projects is in Cincinnati, with a $42 million addition and renovation that more than doubled the space to 177 rooms, making it the largest in the world.

While the exterior of the renovated and expanded structure is primarily masonry to blend in with the surrounding Avondale neighborhood, the courtyard created by the L-shaped design is a study in fun. Here, designers with the local firm GBBN Architects clad the walls in metal panels that provide pops of playful color – two shades of green and one of yellow – around all the window openings and from top to bottom on one inset wall. They provide a backdrop for a recreation area and fountain to give guests access to outdoor space (the building also incorporates a rooftop terrace for more fresh air).

“GBBN, in collaboration with Ronald McDonald House, sought an approach integrating the existing wide range of urban scales of the immediate context,” says Scott Kyle, a GBBN associate and designer on the project. That context included two Cincinnati Children’s Hospital Medical Center towers to the west and south of the building, single-family homes to the north and mid-level office and parking structures to the east. These surroundings had to be taken into account, along with the existing RMH structure to which this new build would be attached.

A number of factors were considered while developing the panel patterning, Kyle adds. “The large façade surfaces are broken down to smaller, scalable modules to make up the playful whole. The panelization also takes into account standard panel lengths, installation methods and expansion and contraction – the horizontal joints incorporated into the system illustrate this integration.

GBBN’s designers specified Petersen’s PAC-CLAD products to create the unique exteriors framing the courtyard. These included approximately 22,000 sq. ft. of the company’s Flush wall panels in a mix of Cityscape – a gray tone that creates a neutral background – along with Patina Green, Teal and the custom yellow Parakeet for the striping that surrounds the windows. An additional 860 sq. ft. of Petersen’s Snap-Clad roof panels were used to create a canopy for the facility’s 7th-story rooftop gathering space.

Pros with Cleves, Ohio’s Neiheisel Steel handled the courtyard wall-panel installation, which was a bit of a landmark project for the firm. “This is the biggest metal panel job we’ve worked on,” says project manager Scott Neiheisel, who adds that Petersen’s local rep, Rick Carpenter, provided significant assistance.

“Rick was awesome to deal with – he was huge in our success,” Neiheisel says. “Not only did he know the panels, he was also very helpful in terms of getting drawings done, along with every detail you run into on the job.”

Still, Neiheisel’s team had its challenges – notably the need to work from lifts instead of being able to use staging. “There were certain elevations where we had to bring in 135-ft. lifts,” he says. “Lifts aren’t as efficient as stages – they bounce and move in the wind.”

The added effort has paid off, though, in the reactions of all involved, including Cincinnati-based Messer, the general contractor, a fact Kyle attributes to teamwork. “The final product was truly a collaboration by the owner, architect, engineers and contractors,” he says. “It has been extremely well-received by the owner, the neighborhood and, most importantly, the guest families calling RMH Cincinnati home.”